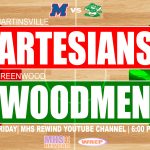 Mark James entered the 2019-20 season among the 20 winningest head coaches in Indiana high school basketball history. Currently in his 2nd season leading the Perry Meridian program, the 1973 Martinsville graduate began his head coaching career with three seasons at Covington. From 1985- 2010, he was a fixture as the head coach at Franklin